Welcome to my Muzo review, which is one of those crowdfunded gadgets that made quite a splash at Indiegogo and Kickstarter. For you guys who have not heard of it, this is a device that claims to be able to cancel out environmental noise. Think of it as a noise-canceling speaker.

For you guys who have heard of it, yep, I am foolish and curious enough to buy one of these. As I am interested in videography, I just thought this might make a pretty good addition to minimize some noise when shooting indoors… Even though the audiophile side of me says that it is impossible with the current level of technology.

Lastly, yes, I regretted the purchase. Don’t be too excited if you find one of these on eBay going for cheap… This gadget doesn’t work as advertised.

WHAT IS MUZO? HOW DOES IT WORK?

Muzo in a nutshell, claims to be an “advanced” device that can cancel out environmental noise with anti-vibration technology.

MUZO IN A NUTSHELL

There are 3 modes of using the Muzo:

The first impression when I got the box was “looks like some sort of Apple or Samsung knockoff”. Well, let’s give them some props for having a decent packaging, but it just somehow strikes me as a cheap knockoff trying to look expensive. 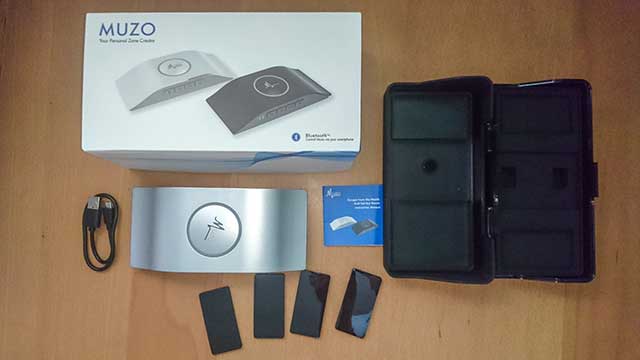 The insides are not that shabby actually, it’s just that the design of the box ticks me off in the wrong way somehow. The Muzo comes with its own carrying case, and in it contains: On the front is a big switch that acts as the power and mode switch. I really don’t like this switch as it got stuck a couple of times when pressed down… It also rotates around as a volume knob, but is another major fail with its difficult-to-turn smooth surface. I have also accidentally switched the mode when turning the volume. To the side are a few buttons to change the soundscape (white noise) and the Bluetooth on/off switch.

The other side holds the charging port, 3.5mm audio jack, plus a reset switch. Yep, if they give a hard reset switch, it means that this thing will hang.

I know it’s kind of strange to be writing the results of the tests on an audio device. But here is my experience of testing out the various modes and functions on the Muzo. I may add a review video in the future, as it seems to make more sense. In the sleep mode, the Muzo plays a soundscape track (wind, forest, river, etc…) to help you sleep better. So for the first test, I set the Muzo beside my bed on a Marble floor and switched the television on.

Well, that absolutely did not help. The television is still clearly audible, and the soundscape track is just making things worse by adding more noise to the environment. Sleep mode, an absolute fail.

For this next test, I lowered my expectations knowing that this is not a “miracle device” as they claim it to be. I gave it a little more thought, and figured out that the Muzo is probably more capable of countering vibrations on a surface rather than with air.

Since this device does not actually work on the floor, I switched off the television, closed the door and windows to my room. I stuck the Muzo onto the window, and set it to run in the serenity mode.

Now, I live beside a rather busy road, and this should at least cut some of those traffic noises. It does kind of seem to work, drowning out lighter vehicles passing by. But as the buses roll by, this device does absolutely peanuts. Serenity mode… kind of mildly works. As for the final mode, the secret mode is supposed to create a “bubble” that gives you a “privacy zone”. I placed it on my wooden cheap Ikea desk, and played some soft music with my desktop speakers. The result – another fail. I could still hear the soft music clear as day. The secret mode is not very secret after all.

When connected via Bluetooth, the Muzo acts as a speaker. This is probably the only feature that is functioning properly. The Muzo supposedly comes with an app available on both iPhone and Android. This app will give you more control over the Muzo, allowing you to mix the soundscapes, customize the lights and stuff. But as I tried out the app, this just seems to be an app that is still in the early stages of development.

The “mixer” for sleep mode seems to be incomplete or buggy. Moving the sliders around, tapping the play button did nothing for me. The custom mode only seems to change the color of the light and does nothing else. What is the purpose of this app again?

I was not expecting much in the first place, but to get a device that could at least muffle out the environmental noises by a fair bit. As it stands, the Muzo has miserably failed almost all my tests and expectations.

At its current stage, this is an experimental device that does nothing more than generating white noise. Maybe you can consider it as an expensive Bluetooth speaker. If I wanted white noise, I could have just done that with any speaker and even my smartphone.

The mobile app is yet another disappointment. It seems to be broken and the functions are not fully developed yet. In one of the earlier newsletters, Celestial Tribe (the company behind Muzo) stated that they will roll out the hardware first, then “fix” stuff via software updates.

There have been no updates so far, and I keep my fingers crossed. My current conclusion of 1 star stands as long as this device is not able to do what it is supposed to. If I can get a refund for this piece of crap, I will.

P.S. If you need some peace and quiet, go get yourself a pair of good noise-canceling headphones instead.